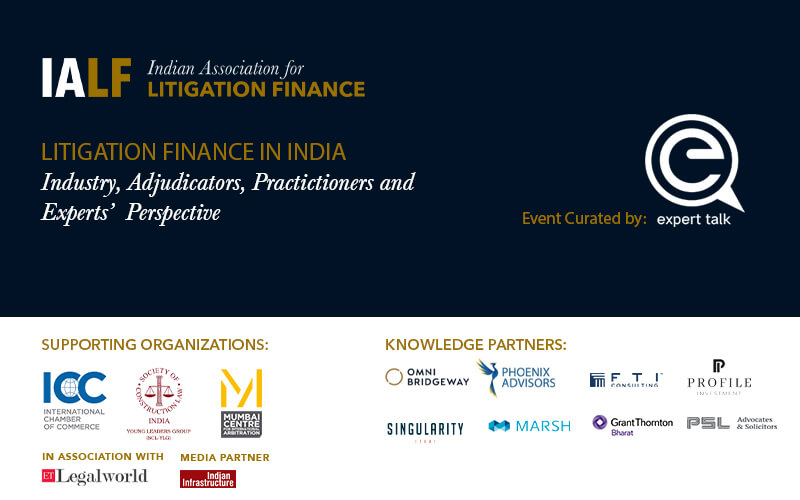 Recognizing the ripe conditions in the Indian market as well as the support for litigation finance in Indian law, third-party funders and service providers like law firms, practitioners and arbitral institutions have come together to form the IALF, to create self-regulations for, and promote knowledge-development of, litigation finance in India. Sophisticated, global players such as Omni Bridgeway, Phoenix Advisors and Profile Investment are involved with the IALF. Service providers such as PSL Chambers, FTI Consulting, ICC, Grant Thornton and Singularity Legal are also involved.

Prior to transitioning to a more formal structure, the initial formation of the IALF will be spearheaded by a Working Group - a body of experienced jurists and thought leaders in the field of dispute resolution and litigation finance. The following are the members of the Working Group:

Justice Sikri & Mr. Desai were unable to attend the ceremony due to unavoidable reasons.

The panel discussion was moderated by Mr. Bagaria, and spanned across 5 themes:

Mr. Bagaria opened the discussion by explaining how litigation finance is an umbrella term, that actually encompasses a versatile range of transactions – beyond just funding the costs of one litigation for a part of the future winnings, funders may also discount awards, provide working capital for the claimant’s core business, provide insurance, and also act as ‘general contractors’ that manage disputes with their vast international dispute resolution experience.

Turning to India, Mr. Bagaria pointed out that the perception that litigation finance is illegal or against public policy in India is actually a result of inadequate market awareness. In fact, the torts of ‘champerty’ and ‘maintenance’ that have prohibited litigation finance in most common law countries were never adopted in India due to their Christian roots. Therefore, a fair agreement to supply funds for litigation in exchange for a part of the future proceeds has always been upheld in India, since late 1800s by the Privy Council right up to 2018 by the Supreme Court.

Mr. Bagaria then explained that with growth of international disputes and developments in Indian laws, litigation finance is growing in India. It is in this backdrop that the IALF is created as a self-regulatory body of funders, lawyers, experts, adjudicators and institutions. He explained how the Working Group will create the core instruments of the IALF, and then appoint and hand over the administration of the IALF to a Board of Directors, a CEO, a Chief Disciplinary Officer and a Dispute Resolution Board.

Mr. Bagaria then put questions to the representatives of the funding industry within the Working Group.

Mr. Grec explained how funding improves access to justice by not only taking away the risk of a loss from the claimant, but also helping it understand the weaknesses of its own case from the funders’ eyes.

Mr. Glasgow was asked if India is ready for litigation finance. He said that it was - the launch of the IALF, improvements in Indian procedural laws and the large number of international disputes already being funded are some factors that evidence this. He also stated global funders see many interesting opportunities in India - international arbitrations and foreign litigations involving Indian parties, sectors such as infrastructure, TMT, pharmaceuticals, etc., and debt-collections of financial institutions.

Mr. Massand was asked whether funders would expect lawyers to work on contingency fees in India. He explained that globally funders prefer this so that lawyers’ interests are aligned with that of the claimant / funder. However, the industry is adaptive: since India prohibits contingency fees, funders would not insist on this.

Ms. Sivakumar added to this, saying another way of aligning lawyers’ interests is by having a capped budget. She explained that the ratio of expected cost to expected gain must be profitable for the funder & client. By taking the risk of not being paid beyond a pre-estimated budget, lawyers are incentivized to resolve dispute efficiently. Given the importance of budgets, lawyers must be both realistic and comprehensive when estimating the budget; this mitigates the unpredictability of litigation. However, she admitted that if a case has good merits, funders even agree to increase budgets at a later stage.

On being asked how far funders control dispute resolution, Mr. Massand clarified that its subjective. Clients such as banks may want funders to take an active role. At the same time, funders are happy to take a backseat if the legal team is good.

Lastly, Mr. Grec was asked about common reasons why funders reject a case. He answered that lack of clear jurisdiction, inability to substantiate the quantum of the claim, lack of transparency at the claimant’s end, corruption, and risk of insolvency are some common reasons.

He explained that these developments reflect how third-party funding can create a conflict of interest. This risk is aggravated because there is a close-knit community of funders, law firms, clients and arbitrators that all interact / transact with each other frequently. Institutions seek to mitigate this risk by encouraging or mandating disclosure of third-party funding.

Mr. Glasgow concurred that funders do have frequent dealings with parties, law firms and arbitrators, and that therefore disclosure of the funding arrangement is not only needed, but is a better alternative for funders rather than to have the award later undermined by a challenge. Mr. Grec, Ms. Sivakumar and Mr. Massand concurred. Ms. Sivakumar explained that funders only have concern where the funding terms or commercials are scrutinized. Mr. Glasgow, Mr. Massand & Mr. Grec shared this opinion.

Mr. Garg offered his perspective on how funding could help the Indian infrastructure sector. He highlighted through statistics that the sector is sizable, internationalized and diverse, and therefore, lucrative for funders. Further, there is also great demand for funding in this sector, because not only are many projects already undergoing disputes, but also, due to the capital-intensive nature of the industry, businesses cannot afford to pour monies into dispute resolution.

When asked whether public sector undertakings can avail funding, Mr. Garg pointed out their internal procedures mandate high diligence before pursuing claims, and this appeals to funders. He admitted that PSUs may have a conservative approach towards funding, but initiatives such as the IALF can help bridge this gap.

Mr. Jain then explained that funding can be very useful for companies undergoing insolvency, because a liquidator or insolvency professional would be interested in arrangements that can help recover illiquid assets. However, the insolvency law as it stands may be a hurdle, due to, for example, the strict waterfall mechanism. The law may need to be clarified further. Mr. Bagaria pitched in to point out that recent amendments in law are promising.

Mr. Jain also stated that MSMEs and start-ups also stand to benefit from funding. There is significant financial imparity between the start-up and its investors, and funding can level the playing field and bring parties to the settlement table.

Mr. Jagtiani then spoke about how Indian court judges would perceive litigation finance. He opined that, at least to begin with, a lot of judges (though not all) would be wary of third-party funding, because they see litigation as an assertion of rights and not a ‘business’. On the other hand, some Indian laws (such as SARFAESI) have normalized the idea that litigation is also about realization of value. Judgments of foreign courts would also reassure Indian judges that funding should be accepted. Lastly, initiatives like the IALF will create parity between funders and claimants, assuring judges that such bargains would be fair. Summarizing his opinion, he stated that he would advise claimants to avail funding readily in ADR, and less so in matters before Indian judges. However, if funding is the only way for a claimant to pursue its claims, the apprehension of a judge’s negative perception shouldn’t stop a claimant from availing funding.

Mrs. Bakhru then shared the accountant’s and claimant’s perspective on litigation finance. She said that funding creates a level-playing field, brings objectivity into evaluation of claims and protects the company’s bottom line. From her experience, litigations can be a bottomless pit, and it is impossible to set a budget on it. Consequently, pursuing claims can soak up the working capital of the company or hinder expansion plans. Therefore, litigation finance is an extremely useful tool for businesses. No other form of finance is dedicated towards resolution of disputes.

Mr. Mayal then spoke about the role valuation experts play in litigation funding. He explained that a valuation expert helps the funder diligence the claim, and get a picture of the economic bargain it is getting into. The expert objectively assesses the value that can be generated by a claim. This includes identifying the kind of loss (expectation or reliance) to be claimed, getting the valuation date correct and selecting the right assumptions and evidence. The expert must also account for how much time and cost it will take to actually recover that value from the claim, to give an accurate economic picture of what funding the claim would look like. Thus, valuation experts help prepare a case for funders and clients to negotiate a funding transaction.

The discussion ended with a few questions by the attendees.

In summary, the panel discussion offered a comprehensive insight into how litigation finance is likely to pan out in India. It not only offered the industry, experts, claimant, lawyers and institutional perspective on how litigation funding can be a useful tool, but also explained and clarified various nuances involved in negotiating and implementing a litigation funding transaction. All of this was discussed in the setting of Indian laws, litigants and practices. In this way, the views expressed in the discussion corroborated that an organisation like the IALF that promotes litigation finance in India, while performing the balancing act of regulating funders and service providers, is set to be a very promising development for the Indian market.