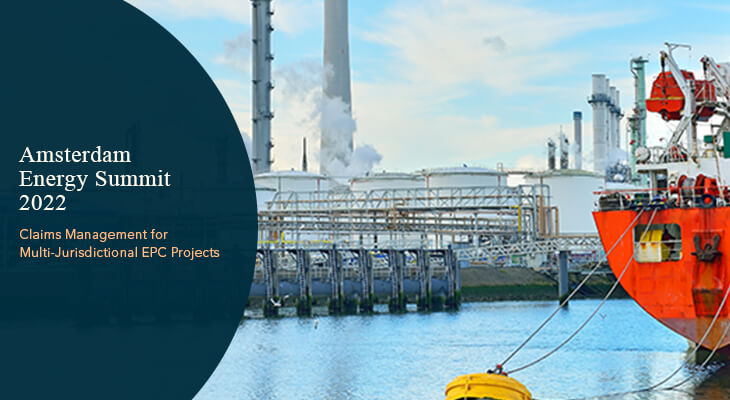 The Amsterdam Energy Summit, 2022, organised by Primo Eventi, witnessed participation from stalwarts and leading professionals of the energy industry. Singularity Legal was a partner of the event, and our partner, Mr. Prateek Bagaria, was invited to speak on “Claims Management for Multi-Jurisdictional EPC Projects”.

In his session, held on Day 1 of the Summit, Mr. Bagaria addressed six aspects of claim management in EPC projects. He began by briefly introducing the challenges faced by the EPC industry, particularly in the context of disputes. He explained how EPC projects require multiple teams with specific skills and expertise, operating in different capacities. In such a model, once there is a dispute, these teams are required to coordinate with each other. However, given the varying expertise, coordination and engagement is not perfectly cohesive. As a solution, Mr. Bagairia underpinned the importance of a central team with broader expertise, to facilitate communication and ensure efficient coordination amongst all teams.

What are the key risks and challenges in multi-jurisdictional EPC Projects in Africa, Asia, and the Middle East?

Mr. Bagaria explained that the capital-intensive nature of EPC projects makes it fraught with uncertainty and challenges. He discussed a case where the client, an Australian employer, chose local partners in the Philippines to execute the EPC project and employed a team in the state of Haryana in India to undertake the construction of the plant. Each of these teams had a very specific mode of functioning, and moreover, due to cultural differences, inter-team communication became tricky. Mr. Bagaria recalled that the sales team negotiating terms had proceeded using standard protocol, in order to maximise the budget. However, in doing so, they missed out a crucial soil survey and failed to factor in the weather in Philippines, which ultimately affected the work for long periods of time due to heavy rains. Mr. Bagaria highlighted how such concerns like inclement weather, insufficient scope definition, poor site management and lack of streamlined communication are key risks that impact such a capital-intensive industry.

Shifting focus to the MENA region, Mr. Bagaria discussed another case related to an EPC project in Abu Dhabi where pursuant to a fire incident, local regulations suspended work and parties faced an uphill task in restarting. The employer then decided to award the contract to a sub-contractor, phasing out our client. While analysing the challenges faced in Africa, Mr. Bagaria addressed concerns regarding price adjustments, material adverse changes in circumstances, and wrongful invocation of bank guarantees. He explained how such challenges, along with incidents of fire hazard, collusion between employers and local partners, and administrative challenges are unique to this region.

What are the potential claims in EPC Projects?

Mr. Bagaria provided his analysis on potential claims and disputes in EPC projects under 3 broad headers. For an employer, he explained that potential claims would be those of latent defect, suspension of work, subcontractors’ inadequate performance and overbilling. From a contractor’s perspective, latent price escalations, collusion between employer and partner, wrongful invocation of performance guarantees and untimely payments. Apart from these, other potential claims would be those of forex and currency issues, insurance, and concurrent delay.

Pertinently, Mr. Bagaria explained the risks of insufficiently defining the scope of work in the contract. He noted how most EPC contracts get negotiated on the go where several elements are not envisaged in the beginning. Often, when there is a site defect, there is uncertainty over which party would be responsible as it is not accounted for in the scope of work and liability. This often results in disputes as each party attempts to shift blame onto the other and save their costs. He mentioned a case where a client in Abu Dhabi had acquired a shipyard after brief inspection, and only upon receipt, discovered that an entire leg was rusted. This resulted in a significant raise in costs and since it was not covered in the scope of work, it resulted in a dispute between the parties.

EPC Contract Negotiation – How to achieve optimal balance between owner and contractor?

Mr. Bagaria stressed on the process of contract negotiation as being crucial to avoiding conflicts and disputes as much as possible. He elaborated on the same by highlighting key parameters to focus on while negotiating a contract.

What are the dispute avoidance strategies?

Mr. Bagaria explained the importance of dispute avoidance strategies in helping parties reduce costs of the project and ensuring that it is completed efficiently. He analysed the following steps that parties may undertake to avoid disputes:

How can you enforce an arbitration award or judgment against a State-owned employer?

Mr. Bagaria noted how it is tricky to recover assets from sovereign-owned employers due to the added layer of protection their assets have. A solution he proposed was to enforce the arbitration award or judgment obtained against State-owned assets, in other jurisdictions. He explained how States often contract-out work to certain private agencies situated in different jurisdictions in order to facilitate efficiency, and how such agencies often have funds that belong to the State, but are situated in another jurisdiction. He gave the example of air passage rights where commercial planes need to give consideration to States when they fly over their territory. In such situations, planes remunerate agencies tasked with such collection. Such agencies are often in Canada or UK, where successful parties could make attempts to garnish these funds. This would effectively eliminate the requirement to go to the State’s own courts and seek enforcement against its own assets.

After Mr. Bagaria’s presentation, the floor was opened for questions. In the engagement that followed, Mr. Bagaria elaborated on his experience while dealing with EPC projects in China. He shared anecdotes from an interesting case where a Chinese supplier was supplying microchips for an EPC project in Asia. The Chinese licensing model had a unique provision whereby the supplier could be using a product that belongs to a certain individual however liabilities could be passed on to the manufacturer. He explained how due diligence is extremely crucial in China due to the difference in law, language and culture. For companies potentially looking to take up EPC projects in China, Mr. Bagaria suggested opting for Hong Kong as the jurisdiction for dispute resolution, to ensure efficiency and mutual convenience.

The event was a tremendous success with sustained participation and interest from attendees across the 5 days. The response to Mr. Bagaria’s session quite interestingly showcased the growing consensus among the industry to shift focus towards identifying strategies to account for, mitigate and prepare for disputes and litigation even in the early stages of an EPC Project.

The Summit proved to be a professional venue for business and government representatives to exchange experiences and consolidate efforts for the successful development of EPC projects in the region and around the world.