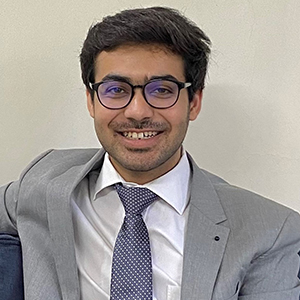 Lakshay is a trainee at Singularity. He specialises in advising energy & resources, and shipping & trade companies in shareholder and joint venture disputes, operational disputes and sovereign disputes. He also specialises in advising on global enforcement and debt recovery strategies, and representing cryptocurrency investors.

His range of experience includes advising clients in international arbitration under various rules like SIAC and JAMS; cross-border disputes before courts in India, Singapore, United Arab Emirates, United Kingdom, and United States of America. He has a passion for laws governing radical technologies and businesses.

Advising an Indian company and its Italian subsidiary in their dispute against a Chinese and a Singaporean company under an agreement for the procurement of photo-voltaic modules (CIETAC Rules, China seated, Chinese law).

Assisting in representing three promoters of an Indian and a UAE shipping technology company in a dispute concerning the wrongful revocation of their shareholding (Dubai law, Dubai courts).

Advising an Indian multinational bank on recovery against an American software company and its personal guarantor.

Advising an Indian multinational bank on recovery against a Mauritius media and broadcasting company.

Advising a Dutch power generation and coal resources company on the enforcement of a SIAC award against a Seychelles company and its Indonesian director.

Advising an Indian public bank on overseas debt recovery from a global group of companies and its promoters.

Advising an Indian public bank on overseas debt recovery from a UAE and an Indian company and its guarantors.