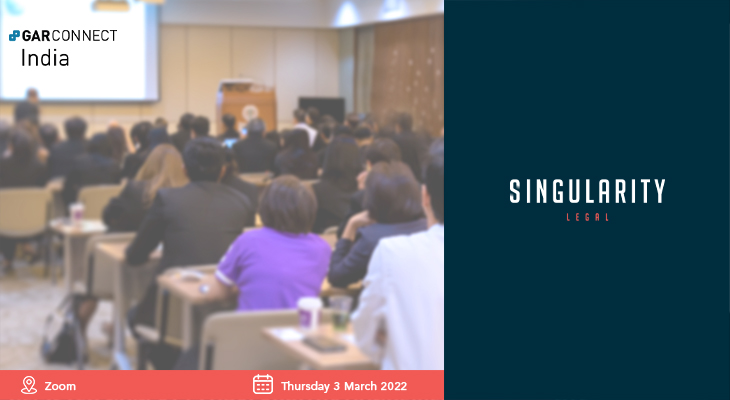 Singularity Legal partnered with Global Arbitration Review (GAR) for GAR Connect: India 2022 on 3 March 2022. The virtual conference saw a series of discussions between stalwarts of the Indian arbitration community on contemporary issues of international arbitration. The event was co-chaired by Hon’ble (Retd.) Justice B.N. Srikrishna, Retired Judge of the Supreme Court of India, Independent Arbitrator and Gautam Bhattacharyya, Partner, Reed Smith, with  Mr. Fali S. Nariman, Senior Advocate, Supreme Court of India, as the keynote speaker.  The conference witnessed participation from several senior-level decision-makers, representatives and thought leaders from both domestic and international arbitration law firms, all keen to hear the panellists’ insights on how the coming years will unfold for arbitration reforms in India.

Our partner, Mr. Prateek Bagaria, was part of a panel discussion on the topic ‘Arbitration reforms: a comparative review from India and elsewhere’.

The discussion was moderated by Mr. Nakul Dewan, Senior Advocate, Twenty Essex. The panel comprised of;

The discussion spanned across 5 themes.

1. Will the retirement of Justice Rohintan Nariman be a backward step for arbitral jurisprudence?

Mr. Dewan opened the discussion by highlighting how far Indian jurisprudence has grown over the last decade, starting with BALCO v. Kaiser Aluminum Technical Services in 2012 and most recently with Amazon.com v. Future Coupon. He pointed out how a lot of the acceleration in growth of pro-arbitration jurisprudence was thanks to one judge – Justice Rohintan Nariman. Mr. Dewan then invited Ms. Parikh and Mr. Bagaria to share their views.

Agreeing with Ms. Parikh, Mr. Bagaria opined that no single person could be solely responsible for the growth in Indian arbitral jurisprudence; this growth has been the collective contribution of the bar and the bench. He referred to the recommendations of the committee chaired by Justice Srikrishna to the Arbitration and Conciliation Act of 1996 (“the Arbitration Act”) which had pioneered the change. While holding his contributions in high regard, Mr. Bagaria posited that even Justice Nariman may not have always got it right, citing three examples in support.

First, in Bihar Rajya Bhumi v. State of Bihar, the Supreme Court had held that the requirement to provide notice to the other party before filing a set aside application was not mandatory. Mr. Bagaria stressed on how, in doing so, ‘shall’ in s. 34(5) of the Arbitration Act had been effectively interpreted as ‘may’.

Second, in Lion Engineering v. State of Madhya Pradesh, the Supreme Court overturned MSP Infrastructure Ltd v. Madhya Pradesh Road Development Corporation Ltd., holding that parties can raise new challenges to the jurisdiction of a tribunal, for the first time, during appeal. Mr. Bagaria highlighted how such a position allows parties to strategically delay their jurisdictional challenges up until the very end.

Finally, in Ssangyong Engineering and Construction Ltd. v. NHAI, Justice Nariman adopted and directed the execution of the dissenting award in an arbitration by relying on Article 142 of the Constitution of India. Mr. Bagaria explained that such enforcement is contrary to standard international practice.

In response to Mr. Dewan’s question on the landscape of arbitral reforms in India, Ms. Bidhuri analysed how the 2015 amendment to the Arbitration Act gave teeth to emergency reliefs in India. While acknowledging the changes made in the amendments, she stressed on how there is a lot more to be done. She highlighted how she would like to see changes such as the designation of institutions for the appointment of arbitrators and clarity on the enforcement of foreign-seated emergency arbitration awards.

3. What reforms that are being considered in England and elsewhere could be adopted in India?

Taking the discussion overseas, Mr. Dewan invited Mr. White’s comments on the reforms being considered in England. Mr. White spoke about potential reforms on two aspects – joinder of arbitrations and summary procedures. Mr. White explained how a joinder would help parties and tribunals to better grasp complex arbitrations which pan across different jurisdictions. He highlighted provisions in the arbitration rules of ICC and LCIA that provide for joinder in certain situations and explained how such flexibility ought to be considered in England. With regard to summary procedures, Mr. White opined that England could look to the ICC Rules that have encouraged expedition since 2017.

4. Can institutional arbitration thrive in India as the MCIA passes its fifth birthday?

Ms. Parikh added how institutional arbitrations are gradually but increasingly being viewed as an efficient and cost-effective path moving forward.

5. The enforceability of emergency relief measures

Mr. White opined that English courts would support the enforcement of foreign arbitral interim awards and anticipated a positive response on this front.

Mr. Bagaria analysed how India is currently more advanced than other jurisdictions with respect to the enforcement of India-seated emergency arbitral awards. He explained how arbitrations seated in Mumbai have the added advantage of applying to strike-off the defence of the defendant in court for contempt, if such an award is not complied with.

With respect to foreign-seated emergency awards, Mr. Bagaria explained how the stance is similar to the enforcement of interim orders of a tribunal. He explained how the enforcement takes place when such orders have reached a stage of finality. Mr. Bagaria credited the judgment in Amazon.com v. Future Coupons rendered by a bench comprising of Justice Nariman for the present legal position an emergency award enjoys in India.

In summary, the panel discussion offered an excellent insight into the reforms in arbitration in India and around the world. The event was a stellar success, with audiences having the privilege of receiving an insight from industry leaders, across different segments, on the workings of reforming arbitral jurisprudence in a country. Such unique insights and discussions on the challenges and potential ways forward would ensure sustained interest and passion for the field of arbitration.